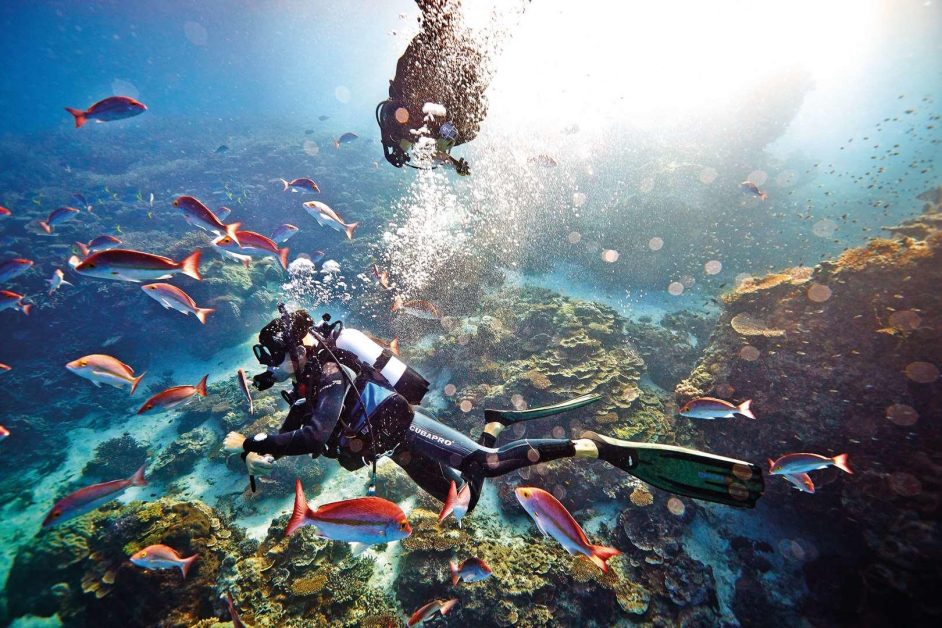 In numerous films about sailors who shipwrecked their vessels on the high seas, the setting has been among the islands of the South Pacific more often than not.  These capsules of paradise in the middle of the vast Pacific Ocean combine immense beauty on their land, and in their reefs just offshore with the incredible isolation of their location, lending an air of exoticism that is unmatched anywhere else in the tropics.

When one plans a vacation to such an isolated place, they are usually interested in powdery white sand beaches, with swaying palm trees in the background, a banana rum shake in their hand, and maybe a skilled masseuse working out the knots in their feet.  At some point, you may grow bored of the idleness of just lying on a lounger, no matter how beautiful your surroundings.  Fortunately, there are many amazing sights just waiting to be discovered under the surface of the water offshore, with minimal effort needed on your part.  So just strap on your mask, fins and snorkel, and make your way to some of the best snorkeling spots in the Pacific.

1) Palau – Blessed with lukewarm water all year round, you’ll never have to worry about getting cold when you slip into the waves off Palau. Here, there are four times the marine species than there is in the Caribbean, so explore the colorful reefs, while the divers in your party scope out the caves, holes, drop offs, and World War II wrecks. You’ll be busy admiring nature’s beauty with little effort on your part.

2) Rurutu – 572 kilometres south of Tahiti, this island is one of the more isolated islands on our tour, making it perfect for those with fantasies of acting out the Blue Lagoon.  Offshore, you can swim with the whales, whose migration path takes them past Rurutu on their way back to Antarctica.  They feed their calves here between July and October, making for the wildlife encounter opportunity of a lifetime!

3) Heron Island, Australia – Approximately 89 kilometres off the coast of Australia near Gladstone in the Great Barrier Reef area, this island grants you enough space from civilization, while being close enough to a first world nation for the sake of your peace of mind.  Heron Island is a sea turtle hatchery, as turtles lay their eggs here every year, and then they hatch between December to February. As far as the quality of the reefs, Jacque Cousteau named this island one of his favourite 10 dive sites in the world, so you know you’ll be in for a treat, as manta rays and reef sharks also call these underwater Eden home. Those afraid of chilly water should time their visit properly, as the water temperature can get down as low as 19c during the winter months (June – September).