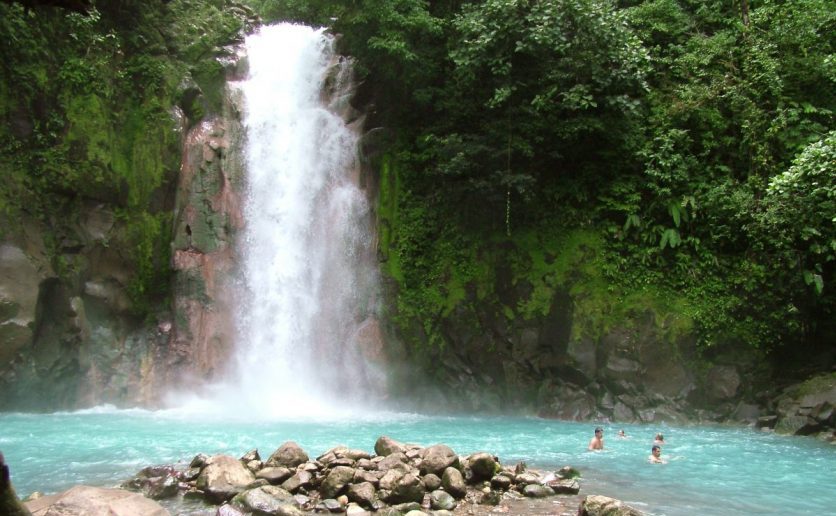 While many of us travel to tropical destinations seeking the warm embrace of the equatorial sun, inevitably the intense heat leads us to seek relief from it. Most often, this involves a dip in the ocean, and while the bathtub warm waters still feel great to swim in, it doesn’t hold a candle to the refreshment of dunking yourself underneath a chillier stream of fresh water from your destination’s jungle interior.

While some waterfalls are so massive that swimming in or near them isn’t realistic, smaller waterfalls are much more accessible and far more atmospheric. On your travels, if you find yourself near the following swimmable waterfall destinations around the world, do yourself a favour and check them out – it’ll likely be one of the days on your holiday you’ll remember with the fondest of memories.

Situated a short way north of the remote Thai town of Kanchanaburi lies Erwan National Park, a place which preserves much of Thailand’s frontier country near a portion of the Burmese border. Within its boundaries lies a series of tiered waterfalls, seven in total. Each tier offers something different, with #2 being a fun chute to swim under and around, #4 features several natural waterslides, and #5 has pools where fish gather to nibble dead skin off your feet. The latter sounds creepy, but it is nonetheless a cool experience for many travelers.

Seeking a truly magical experience? If so, don’t neglect to check out Rio Celeste Waterfall when on holiday in Costa Rica. Located in the western part of the country in Volcan Tenorio National Park, the gorge beneath this powerful chute glows a magnificent cobalt blue, a hue owed to fine bits of volcanic rock flour suspended in water. While the current produced by the fall won’t allow you to get to close to the point of impact, swimming in its midst can be described in no other way besides a spiritual experience.

While swimming at the base of the mighty Victoria Falls is neither possible nor advised, swimming in a pool at the top is somehow safe. At a place called Devil’s Pool during parts of the year (usually between September and December), travelers can swim in a pool right on the precipice of Victoria Falls, a place that is kept relatively safe by a rocky shelf at the very edge and the lack of a current during the aforementioned time of the year. Just don’t get carried away leaning over the edge, as tourists have plunged to their death in the past: don’t join the ranks of the stupid and dead.